The wind energy sector is set for a development boom for the coming years. Nations around the world are gearing up for a substantial expansion in renewable energy to offset concerns over energy security and to meet strict environmental targets and timetables.

When it comes to wind power most of the focus is being put on offshore projects and the promise of larger than ever wind farms and turbines far out to sea. But operators and developers should not be so quick to downplay the potential of the onshore wind sector.

Too old some say, citing farms dating back to the 1980s. Not enough popular support to develop on new greenfield sites say others, and anyway all of the ‘windiest’ sites have already been taken haven’t they?
All true, and indeed given that a typical wind turbine has a product lifetime 20 years there are therefore increasing questions over the reliability and productivity of hundreds of existing onshore wind farms worldwide as developers and operators strive to meet ever more stringent quotas and demand.

All of the ‘windiest’ sites have already been taken haven’t they?

Onshore wind farms can substantially contribute to the great new era of wind without the need for new site locations.

The options are retrofitting, essentially improving an existing turbines efficiency and capacity by fitting new technology such as better grid connections or the latest blade designs, and repowering, decommissioning an existing turbine and building a more modern and powerful version. The UK, Germany, Denmark, the Netherlands and the US are undertaking the majority of repowering and retrofitting projects at present. This is perhaps unsurprising given their ‘pioneering’ status in the wind industry and hence a greater number of aged wind farms than elsewhere.
Emerging wind markets such as China and India though hold significant long-term potential with India already seeing some repowering activity.

The likelihood of failure simply increases in older turbines.

The likelihood of failure simply increases in older turbines and therefore the repair costs rise in proportion. This enormously enhances the potential profitability of repowering or retrofitting the old technology. The only real question is which of both options to take? The first, i.e. replacing old wind turbines with new ones, has its drawbacks because acquisition prices are high and the replacement involves a number of administrative steps that can get to last longer, besides having to add the time of acquisition and installation of the wind turbine itself.

Repowering can refer to a single wind turbine or to a whole wind farm replacing part or all of the turbines before the end of their lifetime with new more efficient and more powerful machines. It can also be used to rearrange the location of the turbines in order to better integrate them into the local planning of residential areas. It is seen as a better option than building a new site at a different less windy location as most of the ‘windiest’ sites have already been developed on.

The ability to re-use part of the infrastructures already developed on site such as roads and grid connection also means less capital investment than building from scratch. Planning permission should also be easier from an existing site.

Overall an operator’s O&M costs are reduced after repowering projects thanks to newer and more efficient technology and economies of scale.
Prohibitive factors against repowering included temporary loss of revenue until the completion of a project, deemed only particularly beneficial for small-size turbines, more expensive and too complex.

The second solution that owners or operators can choose is the overhaul of the turbine, which means to renew some electrical and mechanical components of existing turbines and update the wind turbine control system.

Fitting in new technology such as better grid connections or the latest blade designs.

The cost of a retrofitting option varies but in general, components that are suitable for retrofitting don’t cost more than the O&M specified components and take no longer to install. It also has little effect on a turbine’s insurance or certification.

How are turbines retrofitted?

The retrofitting process consists in integrating a frequency converter equipped with the latest technology in power electronics and the renewal of some mechanical and electrical components.

The integration of the converter allows the wind turbine operate at variable speed to adapt its speed to the wind conditions as do the new wind turbines following current standards. This allows them to work at the optimum operating point for maximum energy transfer between the wind and the blades and smooth operation of the mechanical drive.

In addition, the cost of retrofitting is significantly less than the equivalent of a new wind turbine and its installation time is reduced depending on the owner’s needs and the conditions existing prior to retrofit.

The cost of retrofitting is significantly less than the equivalent of a new wind turbine.

Some industry players want to see better financial incentives given to operators such as more generous feed-in-tariffs to make repowering projects more economic. However that isn’t proving easy in today’s financial climate. I heard one leading developer say: “There is a strong belief that in the next few years there will be an easier planning regime, but that isn’t visible at the moment. So in all permitting is a problem.”

Whatever option is taken continued political support is vital. The ability of repowering and retrofitting to boost the wind sector’s capacity and productivity, not only in developed countries but also emerging markets, will be mute if governments are cutting renewable subsidies.

At WES we have developed a solution to modernize aging wind turbines so that they can be profitable again. Although new wind turbines occupy their own position in the wind energy mix, there is also a growing demand to revitalize assets of a certain age.
With the maturity of the market for onshore wind power, assets are aging and many turbines have already completed their lifetime period.

Repowering and retrofitting offer a sustainable and profitable path forward and the opportunity should be grasped by all.

Do you want to know what the best solution is for your business? 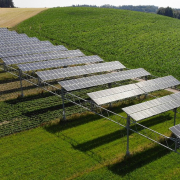 Land use efficiency dramatically increases through dual use

Land use efficiency dramatically increases through dual use