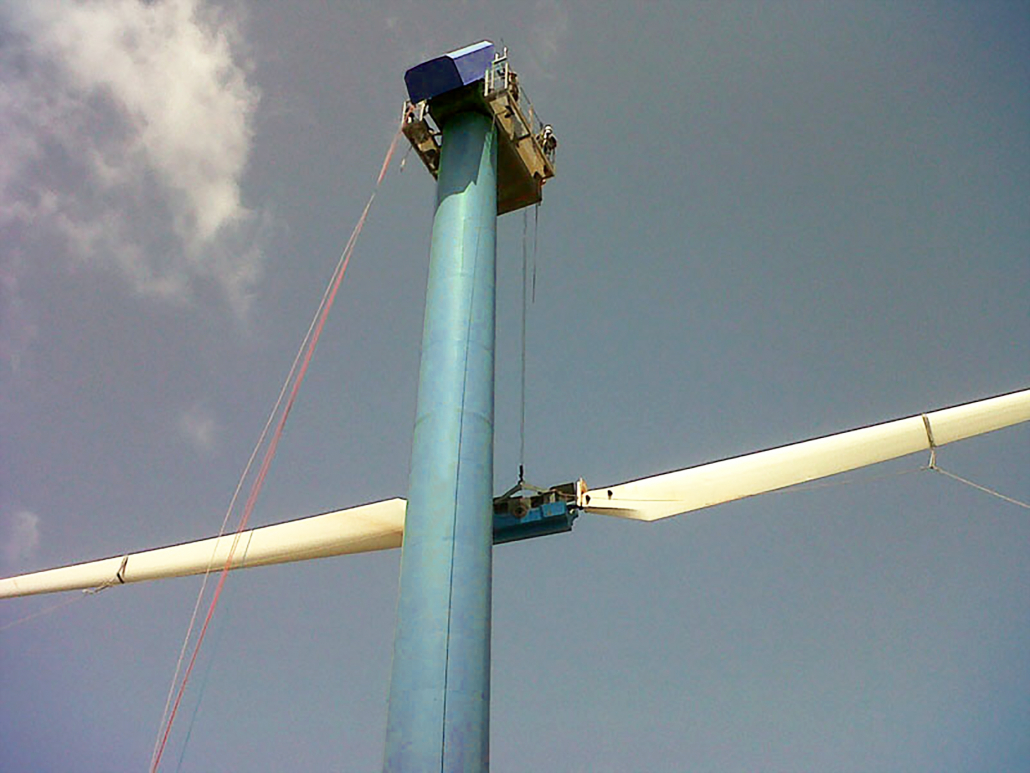 In these times of Corona, we look back to a crisis that did not concerned the entire world but ‘only’ a part of it. Autumn 2017, a number of hurricanes come ashore in the Caribbean and leave major damage.

During the category 5 hurricanes ‘Irma’ and ‘Maria’, one of our engineers was on one of the British Virgin Islands in the Caribbean.

Our colleague witnessed the huge storms and the damage they caused. Roofs were flying through the air, buildings toppled like matchsticks. Our WES250 turbines were also put to the test by both hurricanes. These turbines are equipped with an internal crane, which can lower the major components. The WES towers are hurricane proof and therefore survived Irma and Maria both unscathed.

Installation of our 2-bladed turbines

All of our turbines are 2-bladed which means that they can be installed by using only one crane. Our rotor head and blades can be pre-mounted on the ground. After which it can be lifted and mounted on the nacelle.

Even with major and corrective maintenance, only one crane is needed to lower the entire rotor (consisting of the rotor head and blades).

Experiencing the damage hurricanes can cause combined with our 2-bladed turbine, prompted us to further develop and install our Hurricane Crane.

In order to prevent major damage caused by hurricanes or large storms, we have developed turbines with an internal crane, the so-called Hurricane crane. If a hurricane watch is issued, the turbine owner can bring down the rotor head, generator and blades with the internal crane and without hiring large machinery. Critical components in the nacelle can be stored safely from hurricanes with tremendous wind speeds.

An additional advantage of an internal crane is that a lot of regular and corrective maintenance can be carried out without hiring a crane. For example, a blade has to be replaced, this can be done with the internal crane.

Application of the Hurricane Crane

Our turbines with an internal crane are a perfect fit for regions and islands with poor accessibility or dealing with hurricane seasons such as the islands off the American coast, the American and British Virgin Islands, the Caribbean and the Antilles (upper and leeward islands).

It is questionable what these special times will bring us. How will we resume life after the pandemic?

Are we going to consume less of the earth, invest more in the sustainable energy sources the earth provides for us?

In any case, we will continue to empower the world with renewable energy.

Have you considered the transition to sustainable energy sources? We are happy to inform you more about our wind turbines and the possibilities such as the Hurricane crane.